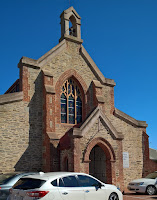 This post is a bit of a break from my "unsolved mysteries" series. We've just returned from a holiday visiting family in Alice Springs, which included taking a 'detour' via Adelaide. The detour was deliberate - we wanted to avoid having to get to the airport in Perth before dawn for the direct flight to Alice. And besides, we both like Adelaide.

While we were enjoying a walk we decided (or should I say, I persuaded my husband) to see if we could have a look inside St Luke's church on Whitmore Square. Susan Mason and David Whybrew were married there by the Reverend James Pollitt on 28 May 1869. Susan's sister Eliza and her sweetheart Jeremiah Murphy were also married at Luke's in March the same year. Last time I visited Adelaide I found the building but wasn't able to take a look inside.

A mid-week service was taking place when we arrived, so we sat in the park opposite until people started leaving, then went to have a peek while the doors were still open.

The minister noticed us and invited us in. When I told him why we were there, he introduced us to a couple of parishioners who, he said, knew a lot about the history of the place. They were very generous in showing us around and telling us what they knew.

St Luke's was the second Anglican church built in Adelaide, after Holy Trinity in the city centre. The land for the building was donated by the Society for the Propagation of the Gospel in Foreign Parts. Apparently the bishop of the day, Augustus Short, arranged for a prefabricated iron building to be brought in pieces by ship from Britain, but the parishioners thought it too expensive and started building with local bluestone instead. Some of the ironwork was incorporated into the stone building and the rest sold off. The church was consecrated in 1856.

A pipe organ was installed in 1868 - just in time for the two Mason sister's weddings! The Mason family were Catholic, so it was probably their spouses' connection with the British Army that led to the weddings being held in the Anglican church.

Unfortunately, the original church was burned out in 1992, possibly as a result of arson, leaving only the stone walls. So what we could see of the interior was mostly the result of rebuilding, and not what David and Susan would have seen. (We  heard a similar story when we went to look at St Mary's Cathedral in Sydney, where John Mason and Catherine Murphy were married.)

Only one small window, located near the altar, remains of the original stained glass windows. The window at the back of the church is a reproduction of what was there before the fire, but all the other windows are new, and part of a commissioned series. As one of the parishioners said, it makes the church quite unique in having a matching set of windows rather than a random collection donated over time.

The church has a long-standing reputation for it's work in the community, so we were pleased to hear that this is continuing, and the congregation is growing. Thank you to those who received us so kindly.

You can find out more about Susan and David Whybrew and their family, in my book Susan: convict's daughter, soldier's wife, nobody's fool, available on Amazon and other online books stores

Posted by Stella Budrikis at 4:25 PM