One of the main characters in my upcoming book, The Edward Street Baby Farm, was born in Limerick in 1855. Harriet Lenihan moved to Australia in the 1880s and eventually came to Perth. Her father, Maurice Lenihan, was owner and editor of the Limerick Reporter, and was Mayor of Limerick for several years. He had connections with many of the leading political figures in Ireland. Harriet was very proud of the fact that her father had written a history of the city, which was widely acclaimed, though it never made its author any money. It had even received a commendation from the Pope.

As far as I know I’m not related to Harriet Lenihan. But I am related to another outcast from Limerick, John Mason, whose story I’ve told in several posts here. So I feel an attachment to Limerick despite never having been there. 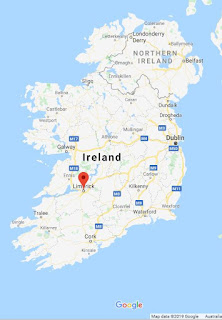 John Mason’s convict records describe him as a ‘native’ of Limerick. He was certainly arrested, tried and transported from that city but I’m not entirely sure that he was born there.

As I’ve mentioned in other posts, the records of the Destitute Board in Adelaide, where he eventually finished up, describe him as English. Possibly he migrated to Ireland, or came from an English family living in Limerick. Whatever the case, at the age of eighteen he was working in Limerick as a boatman.

He must have been one of many boatmen in the water-bound city. Limerick sits some way inland, at the head of estuary of the Shannon river, and is accessible by ocean-going ships. Another waterway, the Grand Canal, makes it possible to navigate from Limerick in the southwest all the way to Dublin on the east coast.


A brief history of Limerick

As the much smaller Abbey River meets a loop of the Shannon, it creates an island, known as Kings Island. The Vikings established a settlement there in the 10th century. They maintained trade links with other settlements in Ireland and Europe and eventually integrated into the Irish population.

In 1195 the Normans from England captured Limerick, and Lord John (later ‘bad’ King John) built a castle on Kings Island and erected walls around the city. Although the city was nominally under English rule, it was fairly independent. In 1413 King Henry V granted it a charter as a city-state.

Henry VIII changed all that. He abolished the Irish monasteries, gave land to his supporters and by 1603 controlled the whole of Ireland. Limerick lost most of its independence.

In the seventeenth century the city was besieged four times, in 1642, 1651, 1690 and 1691. The final siege was carried out by the troops of the protestant William of Orange against the supporters of catholic James II, who were holed up in the city. After the Williamites broke through, a treaty was signed.

Under the Treaty of Limerick, James’ supporters were allowed to leave Ireland, in what was referred to as the Flight of the Wild Geese. Alternatively, they could join William’s army. Civilians were allowed to keep their land and property, provided that they pledged loyalty to William.

But the treaty was soon broken. Laws passed by the English and Irish parliaments, known as the Penal Laws, put Irish Catholics at a great disadvantage. Limerick became known by many as the City of the Broken Treaty

The city itself gradually expanded and the walls were dismantled and rebuilt to allow it to grow. The oldest part of the city on Kings Island became known as Englishtown, while the expansion to the south of the Abbey River was known as Irishtown. The two were joined by a bridge, the Baal bridge. In the eighteenth century there was a further expansion to the south, with a planned grid of wide streets, named Newtown Pery after its founder, landowner Edmund Sexton Pery. This area, with its Georgian architecture, became the city’s CBD.

When John Mason was born, in about 1814 or 1815, Limerick was a city undergoing great changes. A port was constructed to serve the growing agriculture and manufacturing industries. New bridges crossed the river. Many churches and schools were being built, along with hospitals, a court house and a gaol. (John Mason would see the inside of both the courthouse and the gaol.) Gas, water and sewerage services became available for the first time.

But in the 1830s, in the poorer Catholic areas, and the rural areas around the city, there was unrest. Not everyone benefited from the growing wealth of the city, and the new bridges tended to divide rather than unite the different economic areas. The wealthy moved to the new suburbs of Newton Pery, while in the old parts of the city many were destitute.

Food prices had been rising across southern Ireland as a result of potato crop failures. In 1830 merchants raised the price of oatmeal in Limerick by 25 percent. For many people, oats provided their only food supply. A riot broke out on 25 June 1830, and the mob raided warehouses, shops and factories. Although the troops were called in, the authorities also set up a relief fund to ensure that food was made available at a fair price to those who needed it and work was provided for the unemployed.

This then, was the city in which John Mason lived in the early 1830s. Without knowing where John was born, it’s difficult to trace his background or his life in Limerick. Mason was not a common name in the county. A family named Mason had a property of 772 acres at Cappanihane in County Limerick in the early 1800s, but I haven’t found anything to suggest that John was related to them. The newspaper reports of John's trial say nothing of where he was from. My guess is that if the son of a local landowner had been arrested and brought to trial for stealing, the newspapers would probably have mentioned his family background.

Someone once told me that boatmen in Ireland were employed by the government as coastguards. They were often recruited from England so that they had no local ties that might lead to corruption. It’s possible that John or his father came from England in this way. The National Archives UK website has PDF images of the coastguard records of service available for download. So far I haven't been able to find any mention of anyone named Mason in these handwritten records from the 1800s, but I have many more files still to search through.

In the 1830s, many people from Limerick chose to migrate to Australia, some with assistance from the government or their landlord. John Mason wasn’t given a choice when he was given a one-way trip to New South Wales. He was transported in 1833 for stealing a length of muslin cloth.

I've described in another post (Muslin by the yard) my reasoning for thinking that the cloth that John stole came from a haberdashery shop in George Street, belonging to Thomas Evans and his family. George Street, now known as O'Connell Street, is the main street in Limerick, running from the bridge at the southern end of Kings Island through the Newtown Pery district, parallel to the Shannon.

According to the Limerick Chronicle, John broke a pane of glass to grab the cloth, while the owner's two sons were behind the counter. It seems a rather brazen thing to do, and he was easily caught. Could he have deliberately committed a crime to get himself transported? If so, he certainly wouldn’t have been the only person to do so.

The story of John Mason's life after he left Limerick, and that of his family, appears in other posts on this blog. It's also told in more detail in my book Susan: convict's daughter, soldier's wife, nobody's fool. It's available on Amazon and other online books stores. To read a preview of the first chapters, click on the cover image.

Posted by Stella Budrikis at 9:07 AM

If you've enjoyed reading my posts about Susan Mason and her Irish-Australian family, discover the full story in Susan. The book is fully referenced and available in paperback and a variety of ebook formats.