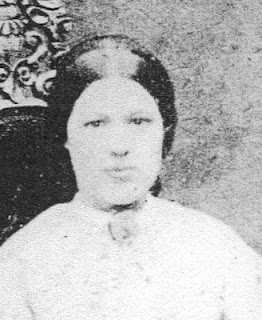 It's difficult to know what name to use for the woman who would become William Beales' mother. Her birth, late in 1846, was registered as "Rosana" Bines and that's how her name is spelled on the 1851 census. But in 1861 she was recorded as "Rosina" and in 1871 as "Rose Anna".

When she married James Beales in 1867 she was "Rosanna". The confusion is perhaps an indication that she and her family were illiterate and didn't really know how her name should be spelled. For this post, I'll refer to her as Rosanna.

Rosanna Bines was the first child of John Bines, an agricultural labourer from Little Clacton in Essex and his wife Eliza Barnes from the adjacent Great Clacton. Rosanna lived in Little Clacton until her marriage to James Beales, then spent the rest of her life in St Osyth, less than 7 kilometres (4.5 miles) away. Apart from her name appearing on the census every 10 years, and the records of her birth, marriage and death, her life went mostly unrecorded.

But not quite. Surprisingly, photographs of her still exist. The copies I have posted on this blog came from the internet some time ago, but who originally posted them and when is unknown. (If you know, let me know and I'll give them the credit.) I've also received copies of the same pictures from a cousin. 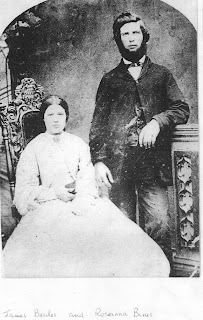 In the oldest of these, probably a wedding photo, a young Rosanna sits in a voluminous white dress besides the heavily bearded James Beales, looking a little startled by the camera. She holds a book in her hand, most likely a prayer book. James is neatly but rather shabbily dressed.

Many years later she and James have their photos taken with their grown up children, all dressed in what would surely be their Edwardian Sunday Best and wearing buttonholes. It's not clear whether the two photos - one with their daughters, the other with their sons - were taken on the same occasion. The clothes that Rosanna and James are wearing and the barn wall behind them are different in the two photos. 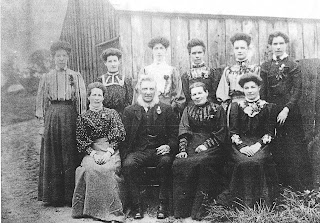 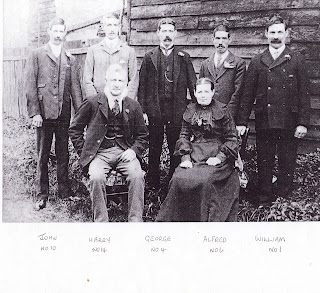 In these photos, Rosanna looks composed and remarkably well preserved for someone who has given birth to 15 children. Only two of her children failed to reach adulthood. Emily died in 1895 at the age of 9. The other child missing from the photo was possibly Ann*, born in 1874, who died in 1876.

None of the Beales' children seem to have been baptised as infants. Their names are absent from the on-line records of either the parish church of St Peter and St Paul or the Wesleyan Methodist church in St Osyth.  Other Beales names are recorded, presumably cousins and more distant relatives. Whether this was because the family belonged to a non-conformist church or sect, or they simply didn't have any religious affiliation before they joined the Salvation Army is another unknown.

They wouldn't have had to look far to find an alternative to the local Church of England parish. Essex seems to have attracted a number of unusual religious groups in the 19th century. St Osyth had a chapel belonging to the New Church, or Swedenborgians, based on the teachings of Swedish theologian Emanuel Swedenborg (1688-1772).

The Peculiar People, a puritan offshoot of the Wesleyans founded by Robert Banyard in 1838, was also active in east Essex at this time. They believed strongly in healing by faith and refused to allow their children to be vaccinated against smallpox or to receive medical treatment. The deaths of some of their children led to the parents being taken to court.

St Osyth is reputed to be the driest place in England. Perhaps it was the salubrious climate, her life as a farm labourers' wife or the disciplines of the Salvation Army lifestyle that preserved Rosanna's health. She lived to the venerable age of 85, dying in 1931.

* Some online family trees list Anna Maria Beales as a child of James and Rosanna, but the only child I can find by that name was born in 1881, the same year as John Beales, and seems to be the child of George Beales. Possibly Ann was also known as Anna Maria. Her birth in 1874 fits in well between the births of George and Alfred, though I don't have confirmation that she was a child of Rosanna and James.
Posted by Stella Budrikis at 5:57 PM