How did Harriet find her family? 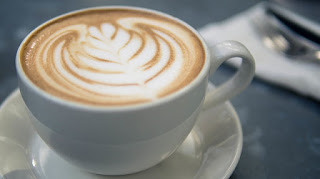 One of the things I most enjoy about having a family history blog is the contact it provides with people from far and wide. It's always a thrill to find an email in my inbox from someone who has read my blog and found a connection with their own family. Often this is followed by both of us exchanging information and photos that we would never have come across through the normal methods of research.

But there's also a rapport that comes, if not from a shared ancestry, at least from a shared interest in family history. I have friends all over the world who I've never met, but still have something special in common with.

Last week I had the pleasure of actually meeting one of these people. He was in Australia for work and family reasons, and we spent a couple of hours sitting in a seaside cafe, drinking coffee and talking about a whole range of topics, including his great great grandmother, Harriet Whybrew. Harriet was sister to Eliza, my own great grandmother and was the original reason for us making contact.

Who brought up Harriet?

Despite the fact that we know quite a lot about Harriet, there are still some mysteries about her life yet to be solved.* The first is, who looked after her during her childhood. She was born in Adelaide in 1868, before her parents Susan Mason and David Whybrew were married. When the British army moved David back to England, Susan and their second daughter, Eliza, went with him, but two year old Harriet remained in Australia.

One story is that she was brought up by the Lindrum family. Frederick and Clara Lindrum were German migrants who ran a billiard hall in Adelaide. Their son Frederick married Harriet's cousin, Harriet Atkin. Walter Lindrum, the famous billiards player, is said to have visited Harriet at her home in England, causing quite a stir. So there were definitely connections between Harriet and the Lindrum family.

The difficulty I see with the idea that the Lindrums brought up Harriet is that Clara Lindrum was heavily pregnant with her own daughter when Harriet was born. The two girls were born only a month apart. It seems an odd time to be taking in another baby, unless Clara was able to feed two infants. Harriet may not have been handed over to the Lindrums at birth, of course. But there is also no official record of Harriet being fostered by the Lindrums, though it could have been a private arrangement.

If she wasn't brought up by the Lindrums, who did look after her? Records suggest that in her teens, her aunt and uncle, Mary Ann and Henry Atkin, were her guardians. This was after the death of Frederick Lindrum senior, and the disappearance of Clara (another unsolved mystery!) so it doesn't necessarily indicate that the Atkins had always been her carers.

When did Harriet leave Adelaide?

The next question about Harriet is how and when she travelled to England. She is mentioned several times in the newspapers in Adelaide during the 1880's, due to her regular appearances in court for "loitering" and other anti-social behaviour. The last mention I've found of her in Adelaide is in August 1885. 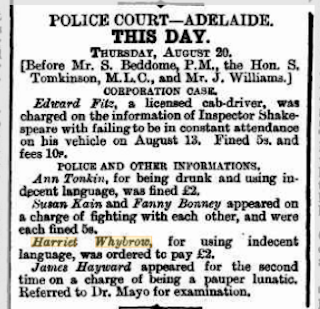 After this her name disappears from the records, and doesn't appear again until she was mentioned in an English newspaper in August 1888. By then she was back with her family in Colchester.

Harriet must have sailed to England, but when? Did she travel alone, or with someone else? Over the years that I've been researching her story, I've come up with all sorts of hypotheses about this, some wilder than others. So far I have found very little evidence for any of them.

Perhaps she was encouraged to rejoin her family by the Salvation Army, who were active in rescuing "girls at risk" in Adelaide at this time. They might have persuaded her to go back to her family. They might even have organised the travel arrangements for her. It would be interesting to know if the Salvation Army in Adelaide kept any records of who they helped. So far I haven't come across any, but I haven't contacted the SA directly.

Perhaps she was escorted by someone already known to her. Her father David left the army rather suddenly in 1885. Could he have travelled to Australia to bring his wayward daughter back to England? Given the cost of travelling even one way, and the financial situation of the Whybrew family, that seems unlikely. His name is not on any passenger lists in the UK or Australia.

Another of my wilder theories is that she might have been accompanied by Clara Lindrum. That would neatly explain Clara's disappearance from Australian records around the same time. Unfortunately neither Harriet's nor Clara's names appear on any official ships' list. Few of the UK incoming passenger lists from before 1890 have survived.

I found one tantalising possibility for Harriet's departure from Adelaide in this newspaper list of passengers departing aboard the Garonne in November 1886. The passengers included  a "Miss S Wybrow".

Harriet's name was often mis-spelled in the newspapers, so it's tempting to think this could be a typo.

However, it's much more likely that Harriet travelled the cheapest way, in steerage. If so, it's unlikely that her name would be mentioned in newspaper reports, since they usually only listed cabin and saloon passengers by name.

Unless I can think of some less obvious way of tracing her journey, I may never know when and how Harriet got to England. Does anyone have any suggestions?

*I'm currently working through some of the unsolved "mysteries and puzzles" in my family history, which is why I'm repeating information from previous posts.

You can find out more about Susan and David Whybrew and their family, in my book Susan: convict's daughter, soldier's wife, nobody's fool.
It's available on Amazon and other online books stores

Posted by Stella Budrikis at 8:29 AM