When I was growing up, I associated the name 'Hebden Bridge' with romance. My parents had fond memories of taking long walks from Hebden Bridge to scenic Hardcastle Crags when they were courting. 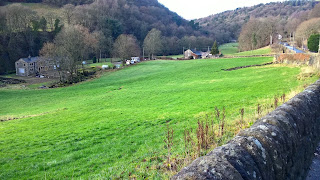 By the time I visited the town for the first time in the 1980s, it was an attractive and trendy tourist centre, full of craft shops, boutique food outlets and cafes. But back in the 1860s, when my great great grandparents Samuel St Leger and Alice Dodd moved there from Manchester with their family, it was a working mill town.

Hebden Bridge, in west Yorkshire, stands in a deep valley where the Hebden Water meets the Calder River. The Rochdale Canal (opened in 1798) and the Lancashire and Yorkshire railway (opened in 1840) run through it, and it’s not far from the major wool-marketing town of Halifax. Until the industrial revolution, sheep farming and hand-loom weaving of woollen cloth were the main economic activities, and Hebden Bridge was less significant than the nearby hilltop village of Heptonstall.

The availability of running water to power the looms led to the construction of many textile mills in the valley in the 19th century. While cloth of all sorts was produced, it gained the nickname ‘Fustianopolis’ because of its specialisation in the production of fustian i.e. corduroy and moleskin. And since these were used in the manufacture of hard-wearing work clothes, it was also known as ‘Trouser Town’.

Samuel St Leger and Alice were both fustian cutters, which provides one clue as to why they moved to Hebden Bridge with their seven children. The cotton famine in Lancashire in the 1860s led to many families moving to Yorkshire.

But they may have had other reasons for choosing to move, besides employment opportunities. There’s no record of Samuel and Alice ever marrying, perhaps because Samuel was already married, in 1840, to an Irish girl, Bridget Dobbs. Bridget moved back to Ireland from Manchester after the birth of their second child, but there’s no record of a divorce. Few working people could afford the legal fees for a divorce, so there were many common-law marriages like that of Samuel and Alice.

Such relationships were not necessarily accepted by everyone though, and they may have felt that they could live more openly as man and wife in a place where neither of them were known.

Their eldest son Ralph (who was probably Samuel’s stepson) married Alice Broadbent, a girl from Hebden Bridge, in 1865. It’s not clear whether Ralph moved with his parents, then married, or whether he moved first and the rest of the family followed. Samuel and Alice’s youngest child, David, was born in Hebden Bridge in 1868, so they must have moved sometime before this date.

When the St Leger family arrived in Hebden Bridge, it would have been a smokey, noisy, bustling place. By the early 1870s it had “a post office [..], a railway station with telegraph, a mechanics' institution, a news room, a public library, many large cotton factories, a silk mill, dye works, iron foundries, and a saw mill” according to John Marius Wilson's Imperial Gazetteer of England and Wales. 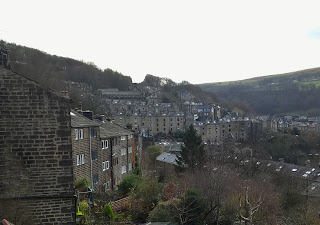 Because of the steep-sided nature of the valley, many houses in Hebden Bridge were built as double-decker terraces, with one family living above another. They were constructed from the local stone. Multistorey mills, with tall chimneys also constructed of stone, were dotted through the valley and up the hillsides.

At the time of the 1871 census, Samuel and Alice and their family were living at 24 Foster Mill Lane, which seems to have been a more traditional terrace, in which many of the occupants were employed in fustian manufacturing. Over seventy people in Hebden Bridge were listed as fustian cutters in the census, and many others were in related occupations.

By 1881, the St Legers were living in a house in Back Commercial Street, closer to the town centre. Only the three youngest children were still at home. Their sons Ralph and William, both fustian cutters, were still in Hebden Bridge, but two of the other children had married and moved back to Manchester.

Samuel St Leger died in Hebden Bridge in 1882. Alice went to live with her son Samuel and his family sometime before the 1891 census and died in Prestwich, Manchester in 1897.

Unfortunately, when we visited Hebden Bridge earlier this year, on a day trip by train from Manchester, I didn't have much information with me. So I wasn't able to find and photograph any of the places where Samuel and Alice lived, though we probably walked past them on our way to see Hardcastle Crags. Even in the middle of winter, Hebden Bridge is a lovely spot, though in Samuel and Alice's day its attractions were perhaps less evident.

Photos all taken by me and copyright
Posted by Stella Budrikis at 4:39 PM