A tale of two dragons, plus Baldwins and Brewsters

This week I've been doing some digging into the history of Sarah Baldwin, my 3x great grandmother. Sarah was the mother of David Whybrew, who married Susan Mason in Adelaide in 1869. What I've found is a still a little speculative, but I thought I'd share it, along with an unusual story about dragons. (Scroll to the end of the post for the dragon story and a summary in tree form of the people mentioned.)

From the 1841 census and the record of her death later in that year, I knew that Sarah Baldwin was born about 1806. She married James Whybrew in Bures St Mary, in Suffolk, England, in April 1826.

As was common at this time, the marriage record makes no mention of her parents' names. After their marriage, James and Sarah lived in Wormingford, not far from Bures, but across the River Stour in Essex.

It seems likely that Sarah was born in Bures St Mary, since that was where she married. There were at least four Sarah Baldwins born within 20 miles of the Suffolk-Essex border between 1800 and 1811, but only one was born in 1806, and she was born in Bures.

She was the daughter of Samuel Baldwin and his wife Mary. They were the only couple named Baldwin producing children in Bures St Mary in the early 1800s. In fact, they produced at least ten children there between 1805 and 1826. The minister recording their baptisms helpfully noted Mary's maiden name, Warren.

Samuel and Mary were married in 1804 in Polstead, Suffolk, the village where Mary was born. I haven't found out much about her yet.

Samuel was most likely the son of James Baldwin and his wife, Philadelphia Brewster. He (ie Samuel) was baptised in 1784 in Little Cornard, a village just a couple of miles north west of Bures St Mary. Again, there are other Samuel Baldwins born in the same area around the same time, but this one fits the facts best.

James Baldwin died in Little Cornard in 1831, and his burial record indicates that he was born in 1751, so he lived to a good age. I haven't been able to find out where he was born or who his parents were.

Philadelphia Brewster, having a more unusual name, was easier to trace. She was the daughter of Ambrose and Thomasen (or Tomson, or Tomasen) Brewster, and was baptised in Little Cornard in 1756. She was the youngest of their children. The first child of theirs for which I can find a record was Sarah Brewster, born in 1746, but one online family tree has their first child, Thomasen, born in 1740.

Here the history becomes mystery. The only marriage I can find for anyone named Ambrose and Thomasen (or one of the many variations on the spelling of that name) around this time took place in Westminster, London, in 1739. Ambrose Berry married a widow named Tomson Lucas in what was described as a clandestine marriage. Such marriages were carried out without the usual banns being read in the couple's home church, and were often performed by clergy located in prisons or other institutions.

It looked as though there could be an interesting story emerging here. The timing of the marriage fitted with the information I had. Perhaps Ambrose had used a false name for some reason. But a bit more digging showed that Ambrose Berry died in Shadwell, Tower Hamlets in November 1741 and Tomson Berry, of the same address, remarried in April 1742, so they are obviously not the couple I was looking for.

Now for the dragons

I still haven't traced a marriage for Ambrose Brewster and Thomasen, or any other details of their lives. But I did come across a wonderful story relating to Little Cornard. Apparently on 26 September, 1449, two dragons fought a ferocious battle on the banks of the River Stour, near Little Cornard, at a site still known as Sharpfight Meadow. One dragon, from Kedington Hill, Suffolk, was black, the other, from Ballingdon Hill, across the river in Essex, was red. The red dragon from Essex won. After the fight, both went back to their lairs on the hills. 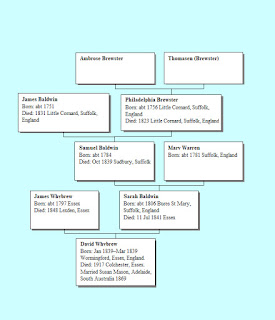 Posted by Stella Budrikis at 12:41 PM