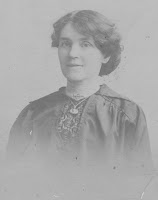 Poor Harriet! I've found more information about her recently, but everything I've discovered has been bad news.

To recap on what I've already written about her, Harriet was David and Susan Whybrew's first child. She was born in Adelaide in 1868, before they were married. When David's regiment returned to England, Susan went too, taking their second daughter, Eliza, with them, but leaving Harriet behind. I've discussed who might have taken care of Harriet and how she came to be reunited with her family in her late teens.

Harriet's name began appearing in the Adelaide press in January 1882, when she was only thirteen, though she was reported to be fifteen. She was charged with stealing a watch and other property. The police magistrate sent her to the Industrial School, a reformatory, for twelve months. Even there she got into trouble.

Between then and August 1885 she was constantly in and out of the police courts, often charged with 'loitering' or with the use of bad language. Sometimes she paid a fine, sometimes she went to prison for several weeks.

I've recently come across some additional newspaper reports and records that I hadn't seen before. All together, I've found twelve mentions of Harriet in the police court between 1882 and 1885. On one occasion, in July 1883, she and her cousin, Rose Atkin, appeared together, both charged with 'using indecent language, loitering etc'. They were each fined two pounds. Rose paid the fine but Harriet went to gaol for three months, presumably because she couldn't pay. On the prison records (which are now available on familysearch.org) both girls were described as prostitutes.

I still don't know what happened to Harriet between her last appearance in the Adelaide courts in August 1885 and her appearance in court in  Colchester in England in October 1888. But I did discover a 'Susan Whybrow' listed in the Adelaide hospital admissions in 1885. She was said to be eighteen years old, single, Roman Catholic, born in South Australia. She was admitted on 26 November.

Since I can't find any Susan Whybrow (or similar name) born in SA around the right time, and the details fit Harriet pretty well, I'm wondering if someone inadvertently listed her mother's name instead of hers. After all, the Destitute Asylum twice listed David Whybrew as her uncle rather than her father. The hospital admission records (which are also now on familysearch.org) show that she was in hospital for two weeks.

The name 'J. Bonnin' is listed under the 'circumstances' column. Was this a doctor? An employer? A friend? Usually doctors were given their title in this column. The only Dr J Bonnin I can find in Adelaide, James A Bonnin, didn't graduate until 1895. A John Bonnin (or Bonnie or Bonney) appeared in the Police Courts around this time, charged with use of indecent language. Perhaps he brought Harriet to the hospital.

Harriet, if this is her, was treated for anaemia. Given her lifestyle, it's quite likely that Harriet would have had a poor diet, which could have led to chronic anaemia. But if she was admitted to hospital for treatment, it's more likely that the anaemia was acute. I can only speculate on what might have caused this, but it does seem that something happened at the end of 1885 that led to the end of Harriet's appearances in the Police Court.

If Harriet was in hospital in late November 1885, then she couldn't have been the 'Miss S Wybrow" who left Adelaide for England on 15 November. The identity of this Miss Wybrow is a mystery. I can't find any other mention of her existence.

How Harriet came to rejoin her family is also still a mystery. My hunch continues to be that the Salvation Army might have had something to do with it, given their outreach to 'fallen women' in Adelaide, and Harriet's sister Eliza's association with the 'Salvos' in Colchester. An article about the Salvation Army 'home for fallen women' in Norwood reported in August 1886 that

Since the opening, thirty-four girls and women have been received, thirteen of whom have been placed in situations, and from reports that are received by the matron, they are giving entire satisfaction, and are most thankful to the officers of the institution for the great benefits derived by them from its establishment. Four of the number have been restored to their parents, and four have been transferred to the lying-in department of the destitute, whilst one married' woman has returned to her husband.

Perhaps Harriet was one of those restored to her parents.

(My thanks to the South Australia Genealogy group on Facebook, who helped me to find some of this information.)

You can find out more about Susan and David Whybrew and their family, in my book Susan: convict's daughter, soldier's wife, nobody's fool.It's available on Amazon and other online books stores
Posted by Stella Budrikis at 11:00 AM

Keep up to date

To stay up to date with what I'm writing, you have two options 1. Subscribe to my monthly newsletter, The Scribbler The first o...