For the past couple of years my blog posts have focused on the Whybrew and Mason families, on the paternal side of my family. But with the recently published 1921 UK census offering never-before available information, I've decided that it's time to take another look at some of the other branches of my family tree. 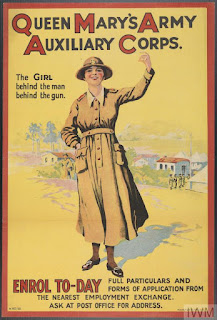 One of the first mysteries that the 1921 census allowed me to solve was the identity of 'Mrs C. J . Hough' who was listed on the National Roll of the Great War at the same address as my maternal grandmother's uncles, John and James Hough. I'd guessed that she was probably the wife of John Hough, since I knew James' wife was called Elizabeth. But I couldn't find out any more about 'C.J.' or a record of their marriage.

Looking up the address given on the National Roll (18 Shuttleworth Street, Pendleton) in the 1921 census revealed that there were two households listed at this address. The first consisted of James and Elizabeth Hough, their son Albert, plus a number of other relatives, including my 17 year old grandmother, Margaret Annie Bentley. (More of that another time.)

The other household contained only two names, Cecil Jean Hough, aged 37, and her one-year old son Cecil John Hough. Cecil Jean was described as 'wife' of the head of the family. Strangely, John Hough is listed as the person who filled in the census, but his details aren't included. But at least I could now be fairly certain that 'Mrs C. J.  Hough' was Cecil Jean, John's wife.

From her son's birth registration in 1920 I discovered her maiden name was Shaw, and the baby was born in Marylebone, in London. A note, 'nee Shaw' also appeared on her entry in the UK, World War I Service Medal and Award Rolls, where she was listed under her married name. It seems likely that she and John met as a result of their time in the armed services.

I haven't found a definite record of their marriage, but a marriage registered towards the end of 1918 between John Hough and 'Cecil J Shand' in Wandsworth is possibly theirs.

On the 1921 census transcript, Cecil Jean is said to have been born in India. This might have been a misunderstanding on the part of John Hough when he filled in the census details. Cecil Jean MacVicar Shaw's birth was registered in Marylebone, London, in the second quarter of 1885. When she was baptised on 2 March 1885, her parents were living at 6 Harley Place, Marylebone. This was a mews off the more famous Harley Street.

But it seems likely that Cecil (sometimes listed as Cecilia) did spend most of her childhood in India.The baptism record describes her father, Robert John MacVicar Shaw, as an Indian coffee planter.

Robert Shaw and her mother, Florence Carew Hutchinson, were married in Jersey in 1876. Florence, who was born in India, seems to have died sometime before 1904. Robert married Marie Ombrey Leacock in Tamil Nadu, India, that year.

When the 1911 UK census was taken, Cecil was in Wales, working as a wardmaid at the Royal Alexandra Hospital in Rhyl. Her experience in that role would have made her a good candidate for the Queen Mary's Army Auxillary Corps. This began orginally in 1917 as the Women’s Army Auxiliary Corps (WAAC). It's purpose was to free up men from administrative and home service jobs for fighting on the front.

On the National Roll her entry reads:

Having joined in March 1918, she was sent to France, where she did excellent work as waitress in the Officers' mess at Abbeville, and was wounded during an air raid on that place. She remained in this area until June 1919, when she returned home and was demobilised, holding the General Service and Victory Medals.  18, Shuttleworth Street, Pendleton."

Cecil Jean was fortunate to survive the air raid on Abbeville, on the Somme. Nine women died in the raid. This film clip shows the damage done to the women's camp.

John Hough was a corporal in the 8th Lancashire Fusilliers and also spent time in France. His entry in the National Roll reads:

Volunteering in August 1914, in the following month he was sent to Egypt, and served there until drafted to the Dardanelles, where he took part in numerous engagements until the Evacuation, and was wounded. He then returned to Egypt, and in March 1917 proceeded to France, where he fought on the Ancre, at Ypres, and in the Retreat. After the Armistice he was sent to Ireland and served there until, owing to ill-health, he was invalided home and discharged in November 1920, holding the Star, and the General Service and Victory Medals. 18, Shuttleworth Street, Pendleton

John and Cecil had (at least) three children - Cecil John in 1920, Peter in 1922 and Margaret in 1926. Peter died in infancy, and possibly also Margaret. Cecil Jean herself died in 1927 and was buried in what seems to be a shared grave with several unrelated people. I haven't been able to discover for certain when John died, although 1942 seems likely. I can't remember my grandmother ever mentioning Cecil or Cecilia when she spoke about her family.

Posted by Stella Budrikis at 4:45 PM

Keep up to date

To stay up to date with what I'm writing, you have two options 1. Subscribe to my monthly newsletter, The Scribbler The first o...