In this series of posts on places where my ancestors once lived, we now travel across many counties, from Lancashire in the north-west of England to Colchester, in the south-east.

Colchester is one of the oldest towns in Britain. It has had a military presence since the Twentieth Victorious Valeria Legion established a garrison there in 43 AD, during the Roman conquest of Britain under Emperor Claudius. For a while it was the capital of Roman-occupied England, despite the best efforts of Queen Boudica to see them off. Over the centuries other armies followed in making Colchester their base. One end of the main street is still dominated by the great Norman keep, and the later castle, built on the mound of a Roman temple. 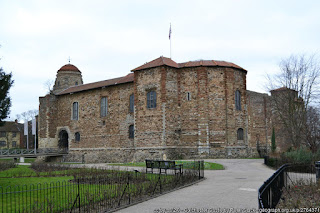 By the end of the 18th century, several barracks had been built in Colchester to house troops and cavalry regiments coming and going from wars on the continent. Wounded men were also brought to the military hospital in Colchester to recover. The townspeople were used to seeing the population of infantry and officers in the barracks swell in times of war, followed by an emptying out in peace time.

But they had probably never experienced anything like the influx of soldiers that occurred with the outbreak of World War 1. Volunteers flooded in. Two hundred men arrived in Colchester each day, to be trained as part of "Kitchener's Army" before being sent to the battlefields of Europe and the Middle East. At times there were as many soldiers in the town as local residents. The barracks couldn't house them all, so they were put in huts and tents, or even billeted with families.


As the war dragged on, the number of volunteers dwindled and in 1916 conscription was introduced. It's not clear whether my grandfather, Thomas Henry Ward, joined up as a volunteer in 1914 or found himself conscripted later on. But whatever the case, he would have been in his early thirties when he travelled by train to Colchester, to join the Army Ordnance Corp.

He would no doubt have found the flat Essex countryside, with its broad fields of wheat and other crops, quite unfamiliar after living in the hilly moorlands of eastern Lancashire all his life, among the mills and factories. Colchester itself was a pleasant, prosperous-looking town, with hardly a mill or a smoke stack in sight.

Before the war, engineering works such as Paxman's, which made steam engines and boilers, were among the main employers in Colchester. They turned to making armaments during the war. The presence of the army also helped keep a brewery and bottling works in business. But Thomas, by all accounts, was not a great drinker. A rather quiet, perhaps even shy man, he was also older than many of the recruits around him.

The Beales family in Colchester


One Sunday afternoon (according to my father) Thomas was invited to have tea with a local family. The Beales were members of the Salvation Army, which had a strong presence in Colchester from the late 1880s, although it was not always well received. The family made it their ministry to look out for lonely-looking soldiers who were far from home

William and Eliza Beales had lived in Colchester all their adult lives. Except for Eliza's mother, Susan, who was from Australia, all their forebears came from villages around Colchester. Eliza's parents, David and Susan Whybrew, came to live near the Beales in Colchester after David retired from active service in the army.

The Beales' daughter Rosina, still in her late teens, may well have been dressed in her Salvation Army uniform when Thomas Henry, in his army uniform, met her for the first time over Sunday afternoon tea. Or perhaps not - family lore says nothing about what they were wearing. They would have had little time to get to know each other before Thomas went off with his battalion to serve overseas, but they evidently managed to keep their friendship going during the war.

In 1921, after Thomas was discharged from the army, they married at St Botolph's Anglican church in Colchester. It was then Rosina's turn to find herself in a strange environment when she and Thomas went back to his home village of Milnrow in Lancashire. She was leaving behind her Salvation Army roots as well as her childhood home in Essex.

Thomas Henry died several years before I was born, but my grandmother Rosina still lived in Milnrow when I was growing up. As a child I knew that she was born "down south" somewhere, and used to belong to the Salvation Army, but she seemed a natural part of what I called "home". It wasn't until I began researching my family's history that it occurred to me that Grandma Rosina must have undergone quite a cultural change when she married. How long did it take her to adjust? How did it affect her? Unfortunately I never had chance to ask her such questions.

In the next few posts I'll look at some of the Essex villages where the Beales and Whybrew families came from. 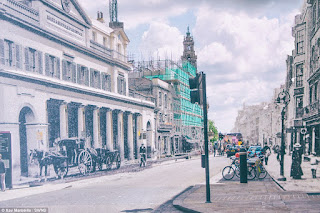 This series of 13 slides by Xav Marseilles shows what Colchester looked like 100 years ago, overlaid with more recent images. It appeared in the Daily Mail, 2 January 2017. (Click on the photo or the link above to see all the slides).

You can find out more about Susan and David Whybrew and their family, in my book Susan: convict's daughter, soldier's wife, nobody's fool, available on Amazon and other online books stores

Posted by Stella Budrikis at 3:05 PM

If you've enjoyed reading my posts about Susan Mason and her Irish-Australian family, discover the full story in Susan. The book is fully referenced and available in paperback and a variety of ebook formats.